Through IT remarketing, the AfB Group makes a demonstrable contribution to environmental protection, resource conservation, inclusion and digital education.

IT Remarketing Saves the Environment and Resources

In 2020, AfB processed more than 472,000 IT and mobile devices, remarketing 68% of them. The resulting extension of useful life enabled AfB to save 24,700 tons of raw materials and 170,400 MWh of energy compared to new production. 300 million liters less water was used and 43,200 tons less greenhouse gases were emitted. In addition, the impact on human health can be measured. More information on the individual key figures can be found in the FAQ below.

The basis for determining the environmental impact is a study by the non-profit climate protection organization myclimate from 2021, which enables AfB to calculate the effect of IT remarketing on the environment and on human health using concrete key figures. This is unique in this form. Christoph Teusch spoke with myclimate about the new life cycle assessment study:

What's behind the key figures?

Work places for people with disabilities

Your used IT devices help create and maintain jobs for people with disabilities at AfB.

By reusing used IT devices, fewer raw materials are mined for the production of new devices. The globally available metal and mineral reserves (e.g. palladium, iron) vary greatly, which is why the consumption of a metal is set in relation to its availability.

For comparability, all metals and minerals are reported in iron equivalents (kg Fe-eq.) as before. This is based on a life cycle assessment study conducted by TU Berlin in 2013.

Humans are exposed to a variety of environmental pollutants on a daily basis. Human toxicity measures the effects on or damage to human health. This damage can be caused by substances (e.g., nitrogen oxides) that enter the air, soil, and water. It is reported in 1.4-dichlorobenzene equivalents (t 1.4-DB-eq.) For example, for a smartphone, extending its useful life from 3 to 4.5 years results in a 45% reduction because no new device had to be manufactured for that period.

Primary energy consumption reflects the demand for primary energy resources (crude oil, hard coal, hydropower, etc.) of a product over its entire life cycle from manufacture to disposal. Primary energies are required to provide the final energy (fuels, electricity, etc.). The indicator is quantified here in the unit kWh. A saving of 1,000 kWh corresponds to one third of the annual electricity demand of a 2-person household in a single-family house.

Water is needed in many processing steps along the life cycle of a product. In many regions, the availability of water is threatened by overuse, among other things. Water resource depletion is quantified here in liters and indicates the amount that has been withdrawn from a catchment area. The AWARE method used is based on quantifying the amount of water left available in an area after the demands of humans and aquatic ecosystems have been met. A saving of 1,000 liters corresponds to 5 filled bathtubs (200 l filling capacity).

Greenhouse gas emissions caused by human activities contribute to the warming of the earth's atmosphere and thus to climate change. The Global Warming Potential (GWP) is used as an indicator. For comparability, all greenhouse gas emissions are converted to CO2e. A saving of 1,000 kg CO2e corresponds to a journey of 4,900 km with a medium-class gasoline engine. To absorb 1,000 kg of CO2e, a beech tree must grow for approximately 80 years. Source: Tagesschau

Water is a valuable resource for life on the planet, which is endangered by toxic substances, among other things. Freshwater and marine water ecotoxicity (Water ecotoxicity) refers to the effects on freshwater or seawater ecosystems as a result of the emission of toxic substances to air, water and soil. Characterization factors are expressed as 1.4-dichlorobenzene equivalent/kg emission (1.4-DB/kg). 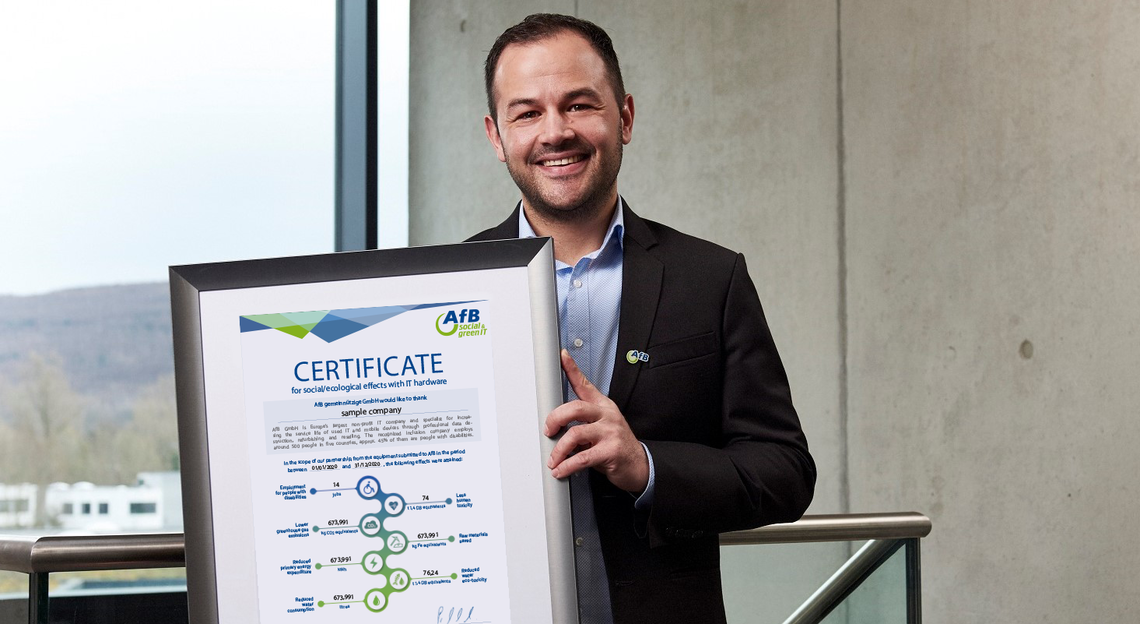 We show our IT partners the concrete environmental and social impact based on their respective device numbers and remarketing rates.

Why have the environmental impacts been updated in the CSR certificate as of 2021?

Until recently, we used a LCA study by the TU Berlin from 2013 as the basis for determining the environmental impacts. This study was updated by myclimate in January 2021, which is why we can now report the impacts for significantly more types of devices. At the same time, we can report additional impact categories compared to the previous study. Based on the now more up-to-date environmental data available, the impacts of individual impact categories have also changed, e.g. in the reporting of the greenhouse gas potential (CO2e).

How can I get a CSR certificate as an AfB IT partner?

Our employees proactively approach our IT partners. The certificate handover can take place digitally as well as in person on site.

Become a partner & get your certificate

IT devices were collected from AfB at the end of the year. Why are these not shown in the CSR certificate?

The CSR certificate is primarily used to demonstrate the social-ecological impact of IT remarketing. Before we can provide you with these key figures, we must first perform data erasure on your IT devices after collection and test which devices are functional, which are repairable, and which are intended for recycling or as spare parts. Only then can we consider and present the corresponding devices in the CSR certificate. The decisive factor is therefore not the collection date, but the test date. This can slip into the following year if a collection takes place at the end of the year. The devices will then be listed in the subsequent certificate.

What do iron equivalents stand for?

The unit "iron equivalents" does not refer to the net weight of an ITC device. A certain amount of different metals and minerals is used in the production of a device, e.g. a smartphone. Since only a certain total amount is accessible worldwide for each of these raw materials, each mining process leaves less available residual quantity for a smartphone. In addition to the amount used in a smartphone, a portion is also lost during mining and manufacturing. The available resources vary depending on the metal or mineral. For example, a smartphone consists of about 11mg of palladium and about 2.7g of iron. Since the world's accessible iron resources (about 170 billion tons) far exceed the accessible palladium resources (about 80,000 tons), mining 11mg of palladium has a greater effect than mining 2.7g of iron. If a smartphone is reused, neither palladium nor iron needs to be mined and processed. These non-mined quantities are saved and resources are conserved. To standardize these savings, we show all metals and minerals in terms of their globally available resources compared to iron.

The basis for the iron equivalent unit of our impact measurement is a LCA study conducted by the TU Berlin in 2013.

What can I do with the CSR certificate afterwards?

The social and ecological parameters of our CSR certificate are added values for your internal and external communication. We will support you in your media-effective communication!

Did you already know?

Resource consumption and CO2 emissions are closely linked. If a notebook recycled by AfB is used for a total of 7.5 years instead of 4.5 years, 113.65kg of CO2e are saved. This corresponds to a saving of 66%!

"We show that sustainability, inclusion and quality are possible. It's great that you and all our partners put your trust in us and make our work possible."

The partnership with AfB - a contribution to seven SDGs

Through an IT partnership with AfB, you make a valuable contribution to the fulfillment of seven SDGs.

By reusing IT devices, water use and the impact on water ecosystems due to the emission of toxic substances is reduced.

By creating inclusive workplaces, AfB promotes the social and economic inclusion as well as the self-determination of people with disabilities.

Reuse and recycling of IT devices leads to savings in emissions, raw materials and energy and thus contributes to climate protection.

IT remarketing contributes to the sustainable extraction of raw materials and the reduction of e-waste landfills in the Global South.

The cooperation between AfB and IT partners significantly supports the achievement of social and environmental goals. 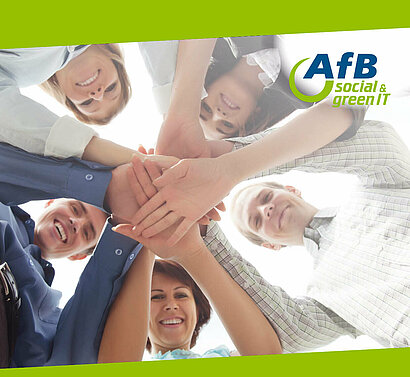 Support for your CSR reporting

We will gladly support you in the compilation of sustainability reports. Whether you report according to CDP, DNK, GRI or the Global Compact, we have already developed text templates and instructions for each standard so that you can easily include the partnership with us and thus your contribution to environmental and social sustainability in your sustainability report.

You have to allow the category Personalization.
Open cookie-settings
Cookie settings

We use cookies to provide you with an optimal website experience. This includes cookies that are necessary for the operation of the site and for the control of our commercial business objectives, as well as cookies that are only used for anonymous statistical purposes, for comfort settings or to display personalized content.

You can decide for yourself which categories you want to allow. Please note that due to yoursettings, not all functions of the website may be available.

You can find further information in our data protection statement.

These cookies are absolutely necessary for the operation of the site and enable, for example, security-related functionalities.

In order to further improve our offer and our website, we collect anonymous data for statistics and analysis. With the help of these cookies we can, for example, determine the number of visitors and the effect of certain pages on our website and optimise our content.

We use these cookies to make the use of the site easier for you. In this way we can see whether you need support and provide you with a customer advisor via a chat.