Representative of disabled person Dusel as a guest at AfB Berlin

Inclusion is the keypoint of the largest non-profit IT company AfB - the company name "Work for People with Disabilities" makes this clear. This summer, Jürgen Dusel, Federal Government Commissioner for the affairs of people with disabilities, was a guest at the Berlin AfB branch to discuss the importance of inclusion companies, the challenges and opportunities. 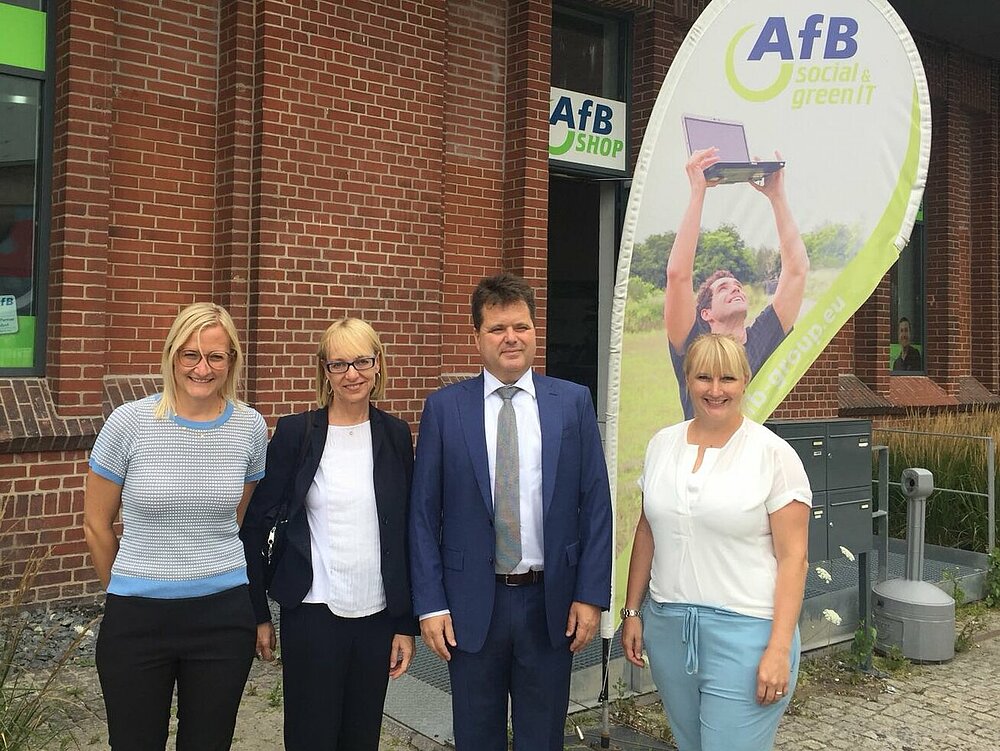 Branch manager Michael Schmelcher and chairwoman of the i500 gAG Nicole Cvilak showed on a tour of the Berlin location how AfB uses IT remarketing to create jobs for people with disabilities. The AfB currently employes 440 people at 19 locations across Europe, of which around 45% are handicapped. The company is also a wholly-owned subsidiary of the i500 gAG, which aims to create 500 long-term jobs for people with disabilities.

During the conversation it quickly became clear how important the intensive exchange between business and politics is when it comes to inclusion on the labour market - because there are many opportunities, but also hurdles that need to be overcome: One of the greatest challenges for companies is to bring the everyday needs of the employee into harmony with economic success. Furthermore, the standardized processes for hiring people with severe disabilities are quite laborious and unattractive for companies. However, these processes also make it difficult for people with disabilities to access the labour market. Simpler and faster processes would promote accessibility in all areas of life and reduce unemployment. Addressing these challenges is worthwhile because inclusion companies could play an even more important role as service providers for society and the economy.

The conclusion of the conversation is:

Overcoming barriers - spatially, mentally, but also bureaucratically - and educating about opportunities for inclusion!

The Federal Government Commissioner, Jürgen Dusel, as an ambassador, and AfB as a best practice example are working collaboratively in the federal association's awareness campaign for inclusion companies under the motto "Inclusion company - added value included". The aim of the campaign is to raise awareness of inclusion companies and employment of people with disabilities and to promote the expansion of inclusive jobs.

Are you interested in becoming a partner or do you want to learn more about our services?

Our services Becoming a partner
You have to allow the category Personalization.
Open cookie-settings
Cookie settings

We use cookies to optimise your website experience. This includes cookies that are necessary for the site to function and to manage our commercial corporate goals, as well as those that are only used for anonymous statistical purposes, for comfort settings or to display personalised content.

You can decide which categories you want to accept. Please note that not all functions of the website may be available due to your settings.

These cookies are necessary for the operation of the site and enable, for example, security-related functionalities.

In order to further improve our offer and our website, we collect anonymised data for statistics and analyses. With the help of these cookies, we can, for example, determine the number of visitors and the effect of certain pages of our website and optimise our content.

We use these cookies to make the site easier for you to use. This enables us to recognise whether you need assistance and to provide you with a customer service representative via a chat.