The AfB gGmbH wants to carry the idea of inclusion and ReUse further into the european society. „We want to convince other companies of our services and consumers of our used products and create awareness of professional recycling“, according to CEO Daniel Büchle and Milan Ringwald, head of production and refurbishment. 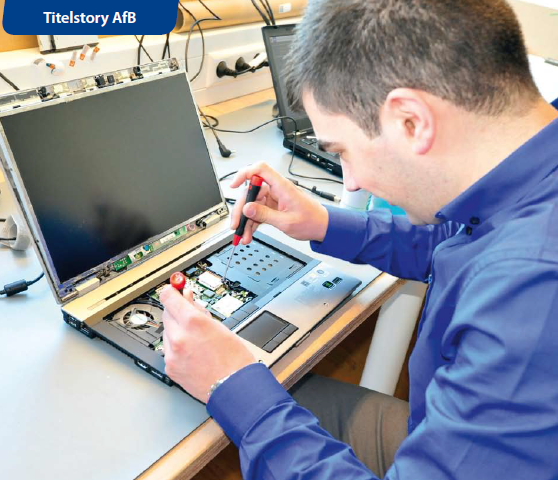 AfB, which will soon have its new headquarters in Ettlingen, Baden-Württemberg, creates jobs as a refurbisher - by refurbishing and selling used IT hardware for people with disabilities. IT recycling and remarketing are the business concept. The goal is "to find solutions that save equipment from being recycled".

After certified data erasure, used and discarded IT equipment is remarketed as far as possible. Mr. Büchle, Mr. Ringwald, congratulations on the 15th anniversary of the company's founding.

Company anniversary! How did AfB celebrate the foundation day 4 October 2004 on 4 October 2019?

We celebrated our customers with a big countdown and offered and sold 15.000 notebooks with a 20 percent discount. The employees of our partners benefited from a 20 percent discount on the entire AfB range. All year round we will be running nice promotions, the next one on Black Friday. After the move, we will celebrate with our IT partners in our new logistics centre at Carl-Metz-Straße in Ettlingen. AfB gGmbH today sees itself as Europe's largest non-profit IT company specialising in IT remarketing and IT refurbishing.

What was the initial spark that led to the founding of the company?

Our company founder Paul Cvilak used to own a leasing company through which he returned used IT hardware that needed to be processed. From the beginning it is clear that exports of scrap metal are out of the question. The good equipment should be reprocessed and remarketed, the others professionally recycled. As chance would have it, there was a workshop for disabled people (WfbM) on the opposite of his leasing company, where the main focus was on...

Are you interested in becoming a partner or do you want to learn more about our services?

Our services Becoming a partner
You have to allow the category Personalization.
Open cookie-settings
Cookie settings

We use cookies to optimise your website experience. This includes cookies that are necessary for the site to function and to manage our commercial corporate goals, as well as those that are only used for anonymous statistical purposes, for comfort settings or to display personalised content.

You can decide which categories you want to accept. Please note that not all functions of the website may be available due to your settings.

These cookies are necessary for the operation of the site and enable, for example, security-related functionalities.

In order to further improve our offer and our website, we collect anonymised data for statistics and analyses. With the help of these cookies, we can, for example, determine the number of visitors and the effect of certain pages of our website and optimise our content.

We use these cookies to make the site easier for you to use. This enables us to recognise whether you need assistance and to provide you with a customer service representative via a chat.